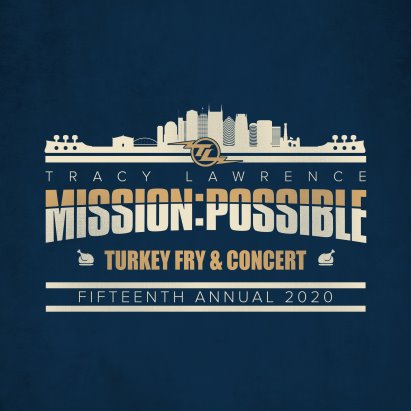 Country music legend and philanthropist, Tracy Lawrence, has announced the return of his wildly successful charity event, the 15th Annual Mission:Possible Turkey Fry and Benefit Concert. Since the event’s conception in 2006, it has helped to raise nearly one million dollars and prepared approximately 93,000 meals. This year, the two-part event will take place on November 24th in Nashville with the turkey fry kicking off the day in the parking lot of Nashville Rescue Mission.

Due to current health and safety guidelines, this year’s concert portion will be a virtual livestream event from the Wildhorse Saloon in Nashville via streaming platform, Talk Shop Live. The star-studded benefit concert will feature Tracy with special guest performers, to be announced at a later date.

For the first time ever the Mission:Possible Benefit Concert livestream will be free to watch HERE with exclusive merchandise now available on the Talk Top Live platform where proceeds will go to feeding the homeless.

Proceeds from Mission:Possible Turkey Fry will go to the Nashville Rescue Mission as they continue their vital work within the homeless communities of Nashville, TN.

Continuing the spirit of giving this holiday season, Tracy will also be hosting an online auction that will run from November 17th – December 2nd, just in time for Giving Tuesday.

To create, promote and implement the Mission:Possible Turkey Fry to feed homeless men, women and children and raise awareness to the plight of the homeless.

ABOUT THE NASHVILLE RESCUE MISSION:

Nashville Rescue Mission is a Christ-centered community committed to helping the hungry, homeless, and hurting by providing programs and services that focus on a person’s entire life—physical, mental, spiritual, emotional, and social.

One of country music’s truest traditionalists, Tracy Lawrence has sold more than THIRTEEN MILLION albums and has charted EIGHTEEN No. 1 songs. He has garnered numerous CMA and ACM awards and nominations, as well as a Grammy nomination. His latest album, MADE IN AMERICA, was a milestone for Lawrence – penning 8 of the 12 songs featured on the album.

Lawrence’s last studio album, 2017’s critically acclaimed, GOOD OLE DAYS, hit the #1 position on the iTunes Country Chart. In addition to his chart-topping success, Lawrence hosts the Award-Nominated nationally syndicated radio show “Honky Tonkin’ With Tracy Lawrence,” for which he has received two ACM nominations for National On-Air Personality of the Year. The show features music from the 80’s, 90’s and 2000’s and is heard on more than 115 affiliates. Tracy is also the co-creator of STORMING HEAVEN: THE MUSICAL, a production based on the novel Storming Heaven. Tracy, along with others, helped to develop the storyline of the musical and also composed songs for the drama. He was honored by the Nashville chapter of AFP (Association of Fundraising Professionals) with “Philanthropist of The Year” for his nationally recognized annual MISSION:POSSIBLE Turkey Fry and Concert, which has raised over Half a Million Dollars for the homeless and hungry in Dallas, Louisville and Nashville, and served more than 84,000 meals. MISSION:POSSIBLE is poised to make an even larger impact in the future, as the 501 ( C ) (3) organization expands into more markets across the country.