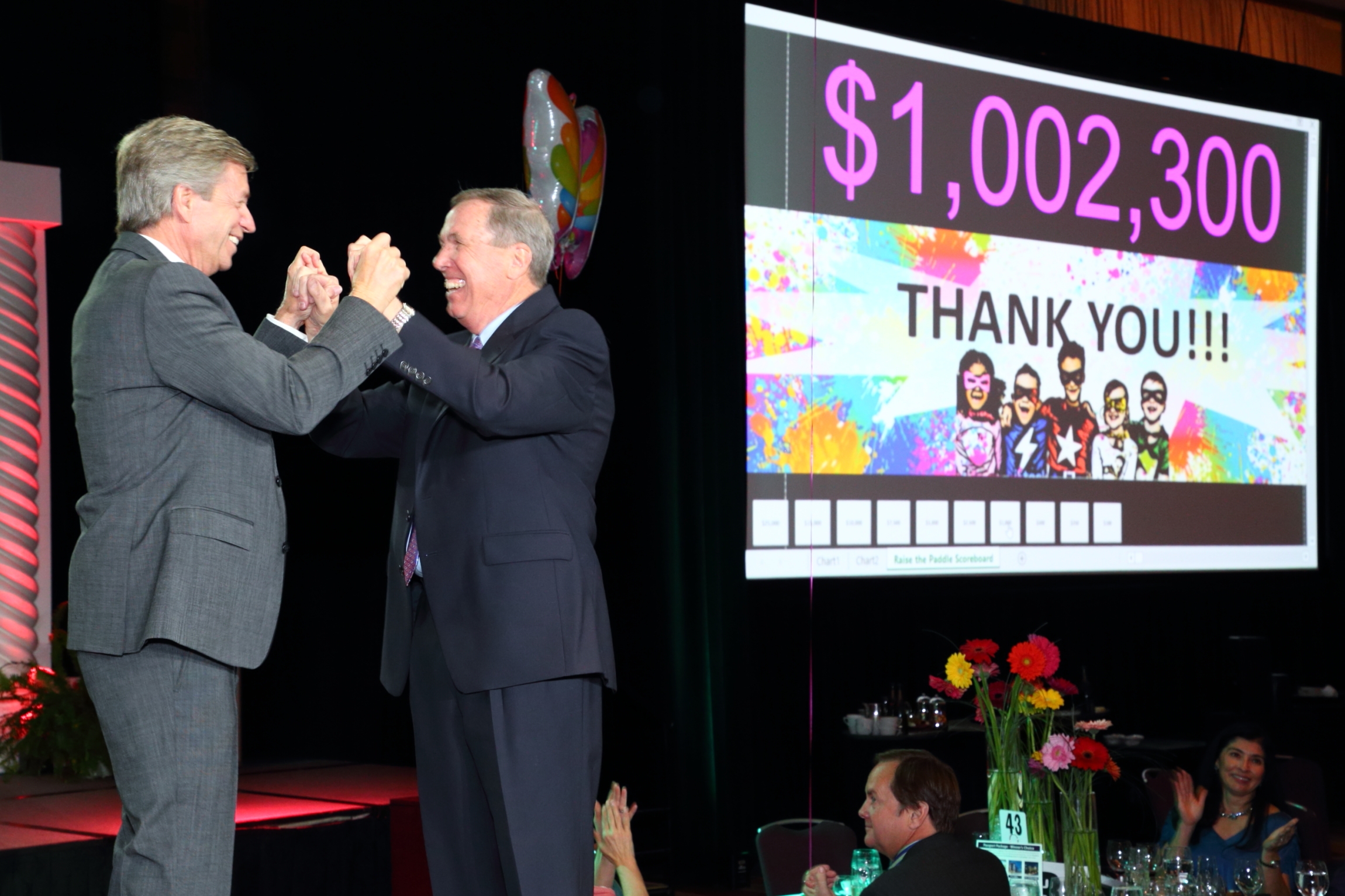 Boys & Girls Clubs of Coachella Valley President Doug Miller and Director of Major Gifts Jim Ducatte  show their exuberance at the moment it was clear that the March 10th Grand Auction exceeded the hoped-for goal of raising over one million dollars – a first for the well known organization which opened its doors in Indio in 1966. Jim Ducatte will be retiring at the end of June 2018 after logging 38 years with the non-profit organization which operates four clubs in the communities of Indio, La Quinta, Coachella and Mecca and serves over 6,500 youth and teens. He received the Champion of Youth award at the event in front of 650 guests for his many years of unwavering commitment to helping youth learn to help themselves and for putting in place a $7.7 million endowment.

Summing up Jim’s career he’ll tell you “You do what you gotta’ do and it’s all been great. I wanted to make a difference in the lives of kids. And I feel good about that today.”

Quinton Egson, a product of the local Indio Boys & Girls Club will be taking over the organization upon Jim’s retirement. Quinton has worked his way up the ladder for the past 35 years and is currently Chief Executive Officer.

It was also a big night for Doug Miller who was presented with the Achievement in Board Leadership for his decade of exemplary service at  the local, state, national level by Lorraine Orr, COO of the Boys & Girls Clubs of America who traveled from Atlanta. “Young people need champions. Doug is a true champion,” said Orr. John Powell, Jr. is incoming President of the Board.

The annual event was founded 36 years ago by passionate supporters John and Joan Foster. Mathis Brothers Furniture has been the fundraiser’s title sponsor for over 18 years and also contributes a very popular $10,000  furniture raffle. The “Raise the Paddle” portion of the evening gained an impressive match in funds from Jacquie and Michael Casey and the H.N. and Frances C. Berger Foundation, which was represented that evening by Ron and Sherrie Auen.

When you raise big bucks like this and celebrate longevity and commitment like Jim Ducatte and Doug Miller have shown, the evening was a true cause for celebration and merriment for the Coachella Valley’s premier youth development organization.

Giving a nod to the betterment of kids is the next big fundraiser, the “Sports Heroes Luncheon IV”on Wednesday, April 11, 2018 at the Hyatt Indian Wells. Guest speaker is USC Athletic Director Lynn Swann who will talke about the power of sports in changing lives. MVP Sponsors Connie and Bob Lurie and Cathryn and Ed Rasmuson are proud to  honor professional athletes and coaches Coco Crisp, Judi Garman, Hudson Houck, Ann Meyers Drysdale and Pooh Richardson as well as 22 Coachella Valley high school standout athletes who will be paired together and spotlighted in the festive “Parade of Sports Heroes.” Tickets may be obtained by calling 760/836-1160.