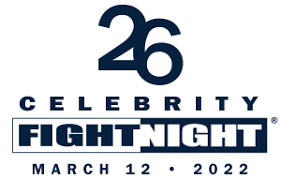 Celebrity Fight Night Foundation, an internationally recognized philanthropic
organization that has generated more than $90 million in charitable funding throughout its 27-
year history, is merging with Gateway for Cancer Research, a global sponsor of innovative,
patient-centric, clinical cancer research. The merger puts Gateway’s Chairman and Vice Chair,
Richard J Stephenson and Dr. Stacie J. Stephenson, respectively, at the helm of the Phoenix-
based Celebrity Fight Night organization, whose charity events are synonymous with star-
studded support for advances in health and well-being. Celebrity Fight Night, whose work has
supported a range of worthwhile causes, will now focus its firepower on defeating cancer, a
devastating disease that annually takes the lives of millions of men, women, and children
worldwide.

“Stacie and I have been passionate
supporters of Celebrity Fight Night
and its tireless work to combat
neurological disease and other
devastating maladies,” said Mr.
Stephenson, founder and chairman
of the Board of Gateway for Cancer
Research. “It is an honor to usher in
the next era for an event that
resonates with so many people and
makes such a tremendous charitable
impact.” Dr. Stacie Stephenson,
Gateway’s Vice Chair, added, “My
husband and I, joined by so many
others, are on an unstoppable
mission to end cancer as we know it.
We support our mission with passion and a sense of urgency for the patients we serve. Bringing
Celebrity Fight Night into the Gateway for Cancer Research family will do much to accelerate
the realization of our vision, which is to create a world in which a cancer diagnosis is no longer
feared.”

Mr. Stephenson is a global merchant banker and the founder and chairman of Cancer Treatment
Centers of America, established in 1988 following the death of his mother, Mary Brown
Stephenson, from cancer. To honor his mother’s life and legacy, Mr. Stephenson vowed to
Photo Courtesy: Phil Gudenschwager

change the face of cancer care. He created a new model of treatment that transformed the way
surgeons, oncologists, and other clinical professionals care for patients with cancer. This whole-
person cancer treatment approach combined with a compassionate, nurturing environment is now
known as the “Mother Standard of Care” and provides a uniquely patient-centered approach to
cancer treatment.

With expertise in regenerative, functional, natural, and advanced lifestyle medicine—the
hallmarks of healthful, energetic living—Dr. Stephenson spent 15 years in private practice.
Today she serves as Chair of Functional Medicine at Cancer Treatment Centers of America and
Vice Chair of the board of directors for Gateway for Cancer Research. She is a noted speaker on
the subject of health and wellness and the author of the newly released bestselling book,
VIBRANT! A Ground Breaking Program to Get Energized, Own Your Health, and Glow. Just
this month Childhelp honored Dr. Stephenson with the prestigious Woman of the World award.
As Founder of Celebrity Fight Night, Jimmy Walker has excelled in securing support and
endorsements from noted celebrities like David Foster, Reba McEntire, Andrea Bocelli, Billy
Crystal, Josh Groban and numerous others. That combined with many decades of passion has
placed Celebrity Fight Night in a
league of its own. Generosity from its
numerous donors, including
individuals like the Stephensons and
charitable organizations such as The
Bob and Renee Parsons Foundation
were instrumental in furthering the
reach and impact of Celebrity Fight
Night. Also, sincere appreciation goes
to the Celebrity Fight Night board
members who were tremendously
supportive throughout the years: Mark
Cavanaugh, Jerry Colangelo, John
Langbein, Harvey Mackay, and Nancy
Walker.

Celebrity Fight Night is distinguished for its affiliation with the legendary Muhammad Ali, who
served as the gala’s guest of honor for two decades until his passing in 2016. “Muhammad and I
were proud to be part of Celebrity Fight Night for more than 20 years,” said Lonnie Ali. “The
legacy Jimmy created and the difference he made in the fight against Parkinson’s disease, as well
as so many other important causes, will forever be recognized. We are grateful for Celebrity
Fight Night’s significant role in establishing the world-class Muhammad Ali Parkinson Center at
Barrow Neurological Institute.”

Sean Currie, who has been instrumental in advancing the fundraising success of Celebrity Fight
Night since joining the organization in 1997, will continue to serve in his role as Executive
Director. Michael Burton, Gateway for Cancer Research’s President and CEO, welcomed Mr.
Currie to the Gateway family. “I have had the pleasure of getting to know Sean over the years
and have long admired his high-impact work at Celebrity Fight Night. The team at Gateway for
Cancer and I look forward to working closely with such a talented professional as we combine
forces in our battle to defeat cancer once and for all.”

Planning for the next Celebrity Fight Night event is well underway. The highly anticipated affair,
which is known for bringing A-list celebrities to Phoenix and raising in a single night millions of
dollars in charitable funds, is slated for Saturday, March 12, 2022.

For more information on the gala, including sponsorships opportunities, please contact Sean
Currie at scurrie@celebrityfightnight.org.

About Celebrity Fight Night Foundation
Celebrity Fight Night Foundation is a nonprofit organization founded in 1994 by Jimmy Walker.
It has gifted more than $90 million over the past 25 years, benefitting the Barrow Neurological
Institute in Phoenix as well as several other worthy charities. Its star-studded black-tie event
features a cocktail reception, silent auction, elegant dinner, an exciting live auction including
one-of-a-kind luxury items and experiences, and an over-the-top, always unforgettable
entertainment package. For more information, visit www.celebrityfightnight.org.

About Gateway for Cancer Research
Gateway for Cancer ResearchSM is a tax-exempt nonprofit organization committed to funding
innovative, breakthrough clinical cancer research that promises novel and hopeful curative
options that help people living with cancer to feel better and live longer. Thanks to generous
underwriting of the organization’s operations, 99 cents of every dollar Gateway raises funds
early phase cancer clinical trials at leading research institutions across the country and abroad.
Since 1991, Gateway has supported more than 190 clinical trials and funded over $90 million in
breakthrough cancer research. Get involved today by visiting GatewayCR.org, like us on
Facebook at facebook.com/GatewayforCR and join the conversation on Twitter at
@GatewaforCR and Instagram at @GatewayforCR, #BeAGateway.
# # #