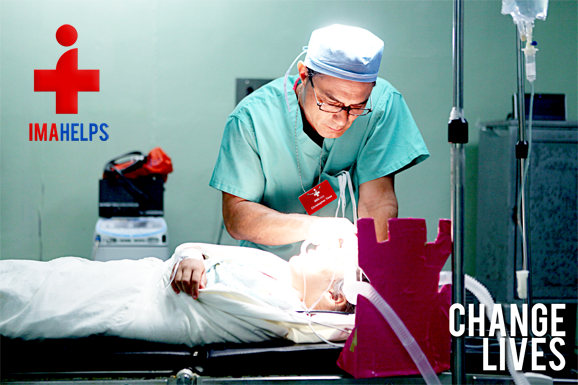 The Rancho Mirage  based nonprofit organizes annual medical missions to some of the poorest regions of Central and South America and Asia.

“IMAHelps organizes medical humanitarian missions and provide medical, health and hygiene education, life-changing surgeries and a broad range of medical, dental, and prosthetic services to under served populations throughout the world.”

Ines Allen and her husband, Tracey, established IMAHelps in 2000 after Ines had spent nearly 20 years volunteering as a dental assistant and Spanish language interpreter for the Flying Samaritans, a similar non-profit, on dental missions throughout Baja California, Mexico.

While IMAHelps initially began as a family effort, drawing volunteers and financial support from both Ines and Tracey as well as several members of their families, Ines has been the driving force behind the organization, which provides healthcare to people who suffer from the same kind of poverty Ines and her family endured when they lived in Ecuador, South America many years ago.

Ines was born and raised in Quito, Ecuador. But her family was poor and could not afford to take Ines’s older brother, Raul Gonzalez, to see a specialist when he developed heart problems as a young teenager. Raul died from heart problems at the age of 16 and his death traumatized Ines and her family so immensely that they immigrated to the United States when she was nine years old with the hope of escaping Ecuador’s poverty as well as the pain of Raul’s untimely death.

Ines and her siblings all pursued their US citizenship, university degrees, and developed careers in their adult lives that brought them into American middle class life. But Ines could never let go of the memories of growing up in poverty or the fact that poverty itself had prevented her family from providing Raul with medical care that could have saved his life.

Haunted by the pain and memories of growing up in Ecuadorian poverty, Ines came up with the idea of recruiting doctors, surgeons, dentists and other medical specialists to conduct medical missions to some of the most impoverished locations in Ecuador, and, ultimately, around the world. She initially recruited volunteers through her contacts with the Flying Samaritans and her network grew by word of mouth. Ines and Tracey began to promote IMAHelps’ medical mission work in the press and in the medical community.

Headquartered in Rancho Mirage, California, the organization was originally called International Medical Alliance or IMA. The name was changed to IMAHelps in 2011 after Ines and Tracey discovered that two other humanitarian organizations were using variations of the same name. IMAHelps became incorporated in 2002, becoming a 501 (c) 3 mutual public benefit non-profit and a Board of Directors was established. Between 2000 and 2009, Ines and IMAHelps organized annual medical missions targeting Ecuadorian cities in South America which included three missions to her hometown, Ecuador’s capital Quito, and then, Salinas and Manta, in the Coastal areas, El Puyo, in the Amazon jungle, and the Andean mountain cities of Latacunga, Ambato, and Ibarra.

Ines and IMAHelps subsequently organized medical missions to some of the poorest cities in Central America, South America, and even Asia, with major medical missions in Nicaragua including Somoto in 2010, Estelí in 2011, Jinotega in 2012, and Matagalpa in 2016. IMAHelps also organized major medical missions to China in Yushu in 2011, the Nangqian County of Qinhai Province on the Tibetan plateau in 2012, and Huinan in 2013, well as Vivek Vihar Colony-Mainpuri, India in 2013. In addition to those areas, IMAHelps organized more missions in Huacho, Perú in 2013, and in Zacatecoluca, El Salvador in 2014 and 2015. Working in collaboration with the Nicaraguan community in Los Angeles through various nonprofit organizations, such as the “Nicaraguan Relief Society” which provided fundraising support, IMAHelps organized small surgical missions to Nicaragua, focusing on Juigalpa in 2013 and Jinotepe in 2014.

Tweets by DesertCharities
Jump! What’s On Your Bucket List
You Can now donate to charity by asking Amazon’s Alexa to send money