— The Women’s March Foundation (WMF), the women-led organization that works towards the vision of shared humanity and equity for all, regardless of race, religion, gender identity or sexuality, today officially launches the Feminist Street Initiative to “reclaim our streets” and rename streets across America to reflect the names of those women who have paved the way and earned their place in history.

The initiative comes on the fifth anniversary of the Women’s March, on the cusp of Women’s History Month and in response to the pandemic, which forced marchers indoors and birthed the idea of maintaining women’s’ presence on the streets even when they could not gather.

In a country where there are 240 million streets, 5,000 named after George Washington alone, more than three-quarters of streets named after men and very few named after women, The Feminist Street Initiative aims to rebalance the scales and ensure that women are counted. The initiative will make visible the names and intersectional public history of art, labor and social justice organizers who have blazed a trail, broken glass ceilings and earned their mark in history. The initiative is also focused on uplifting women, both living and posthumously, who have contributed to community building and community formation and whose legacy is inherited beyond the cities in which they were born and aims to include Indigenous, Black and People of Color women.

The first phase of the Feminist Street Initiative aims to rename streets, including:

“Covid forced us off the streets, but this initiative will help secure our legacy for time immemorial,” says Women’s March Foundation Founder and Executive Director Emiliana Guereca. “Women have contributed significantly to history, but we’ve been rendered invisible at every turn. The Feminist Street Initiative aims to change that and make sure the women who have shaped the world we live in most get the recognition they deserve.”

The Feminist Street Initiative in the coming weeks and months will put into motion the formal street name request process in the respective localities. To learn more about and support the initiative, please visit: womensmarchfoundation.org/feminist-street-initiative.
ABOUT WOMEN’S MARCH FOUNDATION

Women’s March Foundation (WMF) is a women-led, non-profit 501c3 organization with no affiliation with Women’s March Inc. As an independent organization, WMF continues to work towards the vision of shared humanity and equity for all, regardless of race, religion, gender identity or sexuality. Learn more at womensmarchfoundation.org. 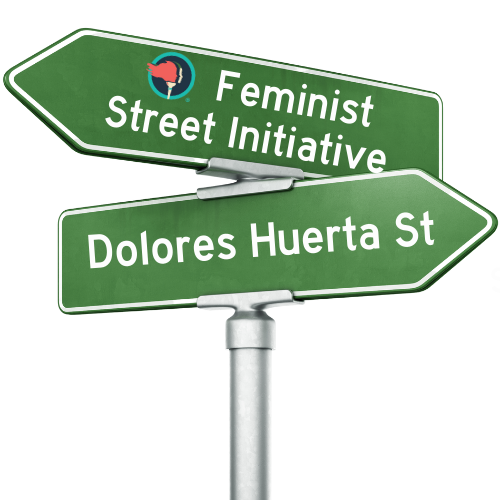