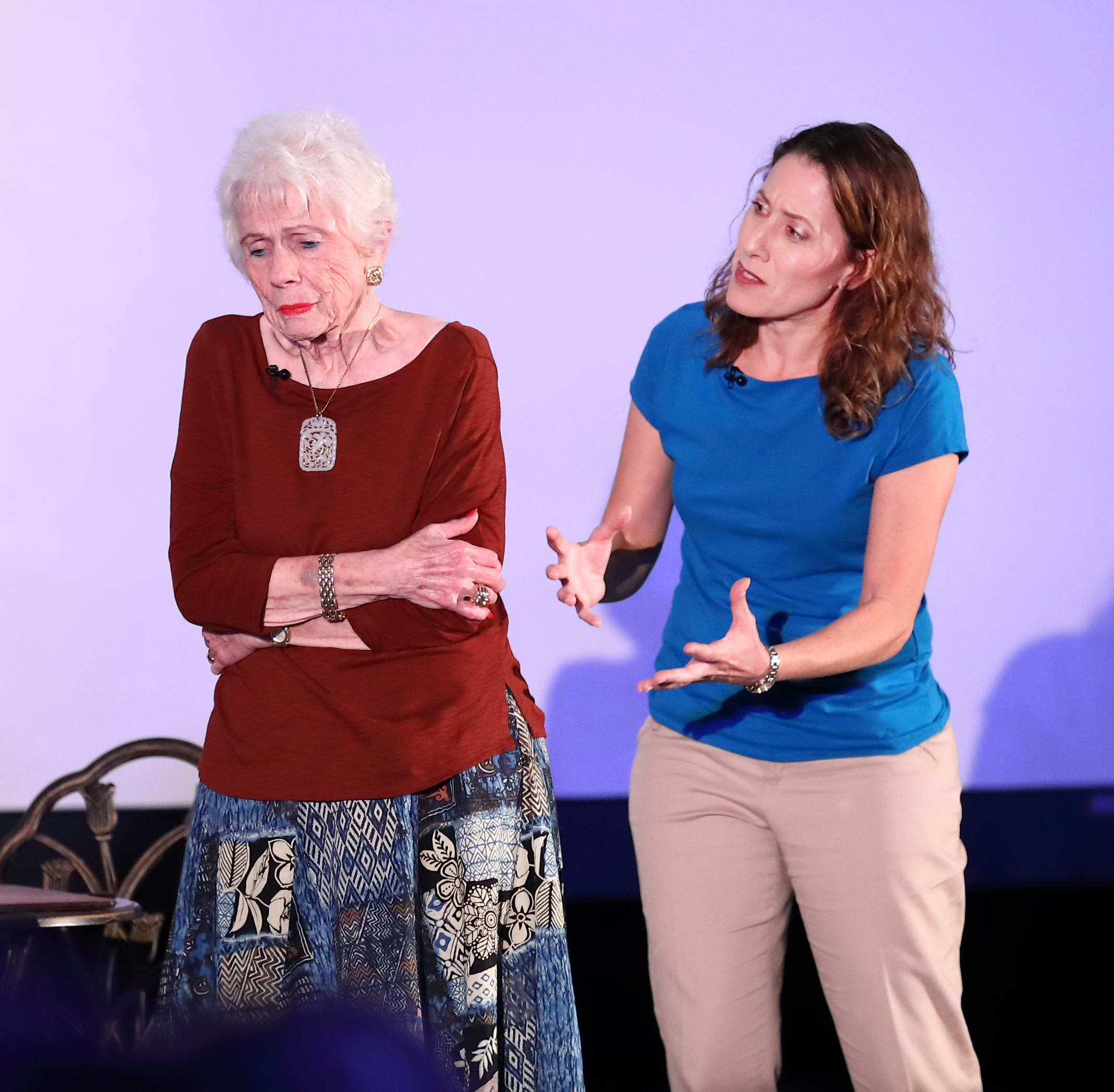 By Pamela Bieri
Broken Open, a powerful one-act play about a woman trying desperately to unlock a family secret from her mother — whose dementia progressed enough to elude her recent memory, but not her painful past — premiered to a sold out audience on March 6 at UCR Palm Desert.

Alzheimers Coachella Valley (ACV) took a risk to produce the play as a highlight of its annual major fundraiser. The event brought a wider audience than usually attends ACV’s fundraisers, but one that dared to learn more about an uncomfortable topic.
“Mami,” played by Alden West, has buried the secret under lies and evasions she no longer remembers inventing. “Bella,” played by Gina Tleel, re-enacts the difficult, angst-producing conversation with Mami in this real-life drama. For many of us, those circuitous, frustrating conversations with loved ones suffering dementia were all too familiar.

In her very first play, Isabelle Sarfati brings us to the edge of the abyss and yet gives us a glimmer that her mother is still “in there,” able to rise to the surface, lucid long enough to tell her story.
The play was directed by June August, longtime writer, director, actor and composer. Set design – a café table and chairs and the front of a small car with a café and beach screen backdrop – depicted an afternoon on the Israeli coast when Isabelle confronted her mother about her past. Toby Griffin designed the set with sound and lighting by Geoff Allan.

Before the play began, ACV Board President Dom Calvano and Co-founder Pat Kaplan presented a “day in the life” video starring Glenna Hall whose husband, Larry, is diagnosed with Alzheimers. They are members of ACV’s “Club Journey,” a social-interactive program, and have benefited from several of ACV’s services. In a heart-felt moment, Glenna says, “I don’t know what we’d do without these programs.”

KESQ news anchor Tom Tucker took the stage to conduct the giving opportunity, raising some $30,000 that evening from the audience and prior donations. Tucker then introduced Dr. Howard Cohen, medical director for Family Hospice Care, also an award winning actor, who spoke about his dual careers and the impact of storytelling before introducing the play.

The event also honored the late Chuck Olsen, lead support group facilitator for ACV who retired from a 45-year career in theater as a prop director.

The funds raised go to support ACV’s innovative, in-demand social and educational programs for individuals and their care partners who are facing Alzheimer’s/dementia. These include Traveling the Journey Together, Club Journey, Dementia Caregiver Training, Meaningful Conversations, valley-wide support groups, and community outreach programs.

To help support these important programs, donations may be made online at www.cvalzheimers.org/donate. Offices are located at 42600 Cook Street, Ste. 134, Palm Desert or call 760- 776-3100.

Tweets by DesertCharities
Free Webinar: Coronavirus and What You Need to know About Postponing and Cancelling Events.
Covid 19- Nonprofit Fundraising Event Resource Guide