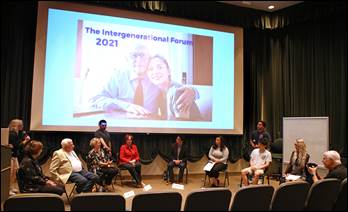 A forum held Oct. 8 brought together Generation Z communication students from Cal State San Bernardino and seniors from the university’s Osher Lifelong Learning Institute (OLLI) to determine how different and alike the two generations actually are.

“At the forum we had five OLLI students sitting across from five Gen Z students,” said Lacey Kendall, communication studies project advisor at the CSUSB Palm Desert Campus. “The moderator asked questions and both sides took turns responding from their point of view. The questions ranged from ‘What is the hardest thing your generation had to live through?’ to ‘What was the most influential artist of your generation and what did they say that affected your generation?’”

The forum was recorded and elements will be included in an upcoming documentary that will air on local stations, including Coyote Radio, which broadcasts from the CSUSB San Bernardino campus, and PAWS Radio, which broadcasts from the CSUSB Palm Desert Campus. The event is part of a special studies internship project for CSUSB undergraduate students Ruby Ramos of Fontana, Ana Gonzales-Munoz of Cathedral City and Carolina De La Herran of Indio.

The project was the idea of television writer and producer Lou Gorfain, who is also an instructor for the Osher Lifelong Learning Institute, which provides intellectually stimulating programming for the large and growing 50+ population in the Coachella Valley. “It’s all about the exchange of dreams,” said Gorfain. “A young generation that has them and an older generation that lived them.”

After hearing about Gorfain’s idea, the three students asked to be a part of the special study project. Since then, they have been studying what the two generations are most passionate about, what angers them, what their fears and dreams are, and what has inspired the two groups in politics, world events and in the popular music of each generation.

The three students are consulting with Eric Vogelsang in the CSUSB College of Social and Behavioral Sciences, who has authored several national papers on gerontology. They will compile and review all recordings from the forum and conduct on-the-street interviews with members of both generations, before collaborating to edit, narrate and produce the final documentary, which will debut this December.

For more information about the Intergenerational Forum, contact Lacey Kendall at (909) 890-6960.

Visit the Osher Lifelong Learning Institute website to learn more about the program.

The CSUSB Palm Desert Campus offers bachelor’s and master’s degrees, a doctorate in educational leadership, and teaching credentials and certificates. With more than 1,600 students, it is the Coachella Valley’s four-year public university and plays a vital role in educating and training the region’s growing population.

For more information about the CSUSB Palm Desert Campus, contact Mike Singer in the Office of Strategic Communication at msinger@csusb.edu or (760) 341-2883, ext. 78107, or visit the PDC website at www.csusb.edu/pdc.