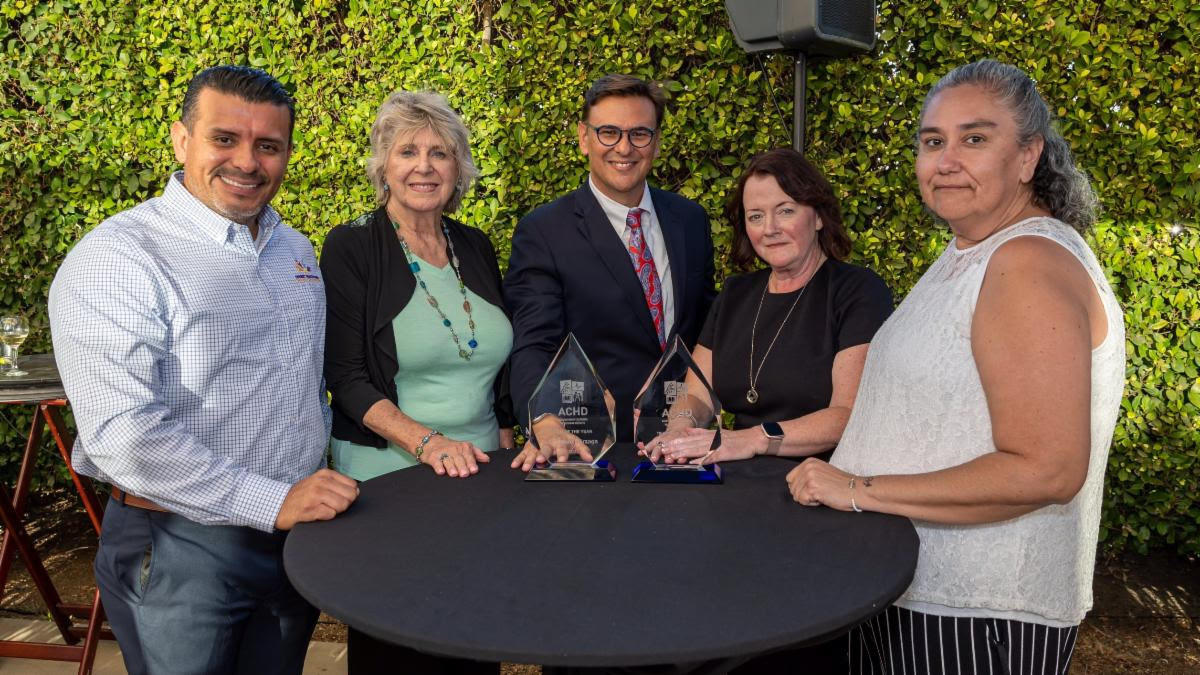 Director Leticia De Lara was named the 2022 ACHD Trustee of the Year. De Lara was appointed to the Healthcare District Board in January 2019 and elected to serve a four-year term in November 2020. She’s served as Board chairperson twice.

De Lara is a lifelong Coachella Valley resident and representative of Zone 7, one of two zones created after the District’s boundary was expanded east of Cook Street in November 2018. She earned a Master of Public Administration degree, serves as a board member with Innercare, and is employed as CEO of the Regional Access Project Foundation (RAP).

“I am honored to serve on the Desert Healthcare District and Foundation Board and to be part of a team committed to improving healthcare access and resources,” De Lara said. “The District demonstrated leadership during the COVID-19 pandemic which increased the distribution of information, testing, and vaccines, which resulted in saving lives. We are proud of the collaboration with our community partners; together we will continue to work toward achieving optimal health at all stages of life for all District residents.”

De Lara is the second Desert Healthcare District and Foundation Board Director to receive the ACHD honor. Her colleague, Director Carmina Zavala, was recognized as Trustee of the Year in 2021.

This year’s CEO of the Year Award recognizes Conrado Bárzaga, MD, who joined the Desert Healthcare District and Foundation in July 2019. During his three years he has led the agency to achieve a number of significant milestones:

He also has been instrumental in expanding the District and Foundation’s outreach into eastern Coachella Valley communities, which were annexed into the District eight months prior to his joining the agency.

In early 2022, Dr. Bárzaga took a crucial leadership role in requesting state funding support for the 32 hospitals affected by the retrofitting law. In his roles as CEO and as chairperson of the Association of California Healthcare Districts Advocacy Committee, he called upon relationships with California State Assemblymembers, most notably Eduardo Garcia, who submitted a letter to the state House and Senate asking for $1 billion of the state’s surplus to be included in the budget for retrofitting needs.

“I am deeply appreciative of the award from ACHD because I understand it’s not only about recognizing the work I do” Dr. Bárzaga said. “I am a reflection of the Desert Healthcare District Board and staff, their contributions, efforts and dedication to advance community wellness in the Coachella Valley.”

Dr. Bárzaga was nominated for the ACHD award by a Desert Healthcare District and Foundation Board Director. Each nomination is evaluated by a panel of judges that is independent from ACHD. This year, the judges included Lisa Maas, Executive Director, Californians Allied for Patient Protection; Kyle Packham, APA Director, California Special Districts; and, Larry Walker, President, The Walker Company.

About the Association of California Healthcare Districts
ACHD supports the diverse needs of the state’s 76 healthcare districts through advocacy, education and other member services. Recognizing top leaders in healthcare for their contributions to the communities they serve, and intended for Certified Healthcare Districts, ACHD presents annual awards for District of the Year, CEO of the Year, and Trustee of the Year. Learn more at achd.org.