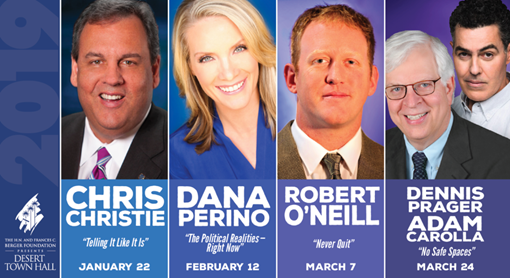 Chris Christie debuts the 2019 series on Tuesday, January 22. Governor Christie is a former federal prosecutor and ABC News contributor who served as the Governor of New Jersey from 2010 to 2018. He ran for the Republican nomination in 2016 and headed President Trump’s transition team.

Dennis Prager and Adam Carolla will take the stage on Sunday, March 24, to conclude the 2019 season. Dennis Prager is a nationally syndicated conservative radio talk show host and writer. Adam Carolla is a comedian, radio personality, television host, actor, podcaster, and director. The title of their program will be “No Safe Spaces.”

A complete list of the renowned speakers who have appeared on the Desert Town Hall stage can be found at www.DesertTownHall.org.

Desert Forum, Inc., a nonproﬁt 501(c)(3) educational corporation, produces Desert Town Hall. A portion of the cost of the tickets is tax­‐deductible.  The lecture series is sponsored by a number of local companies, organizations and philanthropic individuals.

Staff for the series includes Becky Kurtz, executive director; Maria Cross, director of operations; Gina Irwin, executive assistant, and Lauren Nugen, program assistant. Nearly 40 dedicated volunteers, many of whom have been with the series since its inception in 1993, help to make the series a success every year.