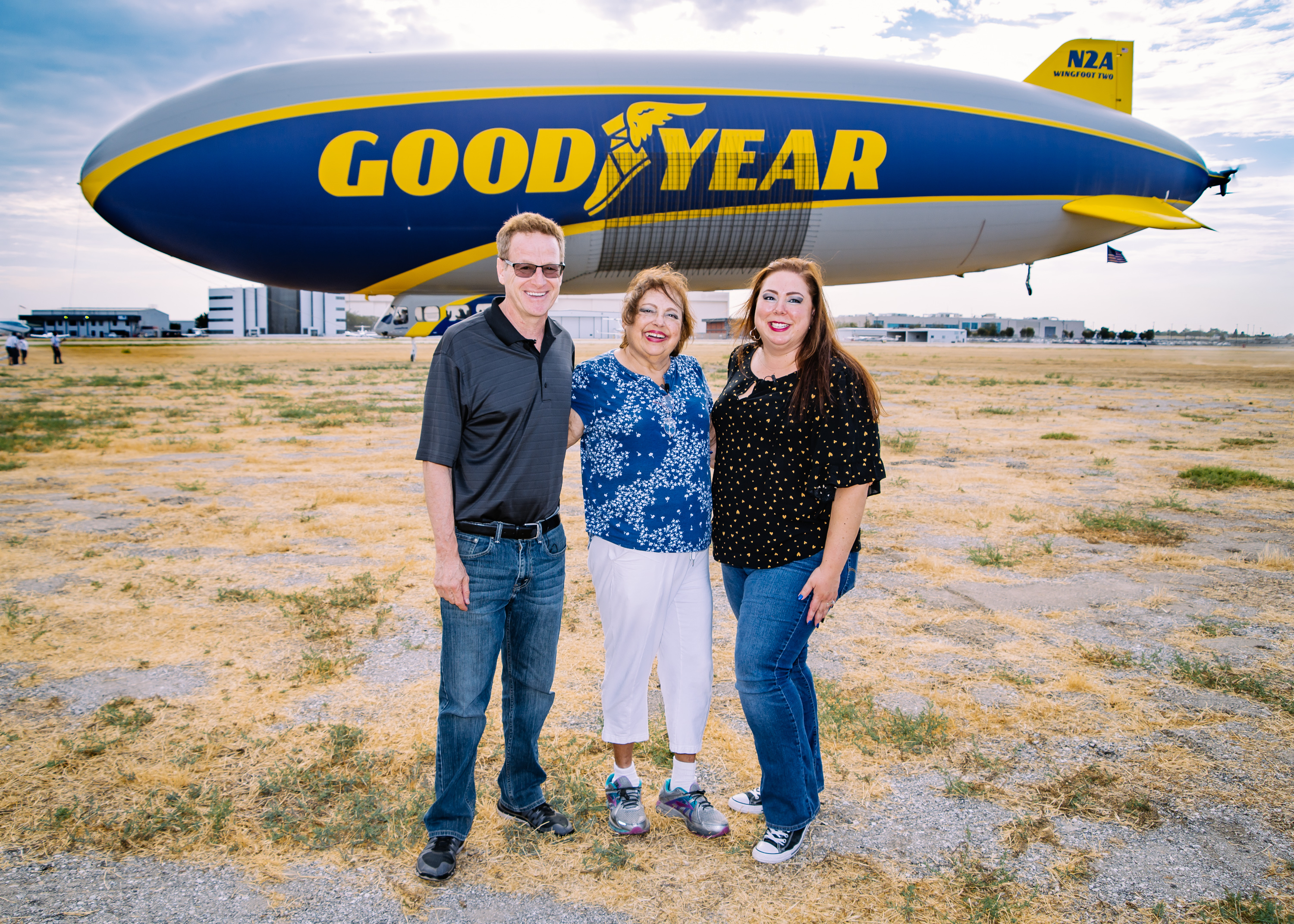 Anita Saavedra has followed the Goodyear Blimp her entire life — and always dreamed of riding in it.

“I had hoped and prayed it would come,” the 69-year-old from Yucca Valley says, “and it has.”

It’s a warm afternoon in July at Ross Aviation Center in Long Beach. We’re riding in a van to the blimp site with Dan Smith, Airship PR Specialist, while he covers the basics.

The blimp, he says, will come down fast and passengers have to be focused and ready to board. Like a balloon, the blimp doesn’t want to stay on the ground (and they don’t like to try and keep it on the ground).

It’s taken three years for Anita, her daughter Christina Varney, and Webb Weiman — founder of My Jump — to reach this moment. And the energy of nervous excitement is tangible among the bus passengers.

Weiman started the local nonprofit, My Jump, eight years ago to help seniors achieve what’s left on their bucket list and to inspire others to do the same. Previously a producer for Emmy award-winning shows like Project Runway and Top Chef, Weiman has been involved with charitable organizations that raise money for cancer research, Parkinson’s, and heart disease.

Having lost his own family to these diseases, Webb now dedicates his time and heart to bucket list requests from strangers (strangers who, of course, eventually become friends).

From ninety-six-year-old Lois Goodman, whose dream was to make over 400 blankets for Children’s hospitals and Homeless Shelters in Minneapolis, MN, to Louise Spencer — who at ninety-two put the pedal to the metal and drove an 18-wheeler, to Anita and her Goodyear Blimp, the wishes My Jump fulfills are both eclectic and extraordinary.

“To make a difference makes all the difference to me,” Webb says, “and to think that Anita almost lost her life 19 years ago and now gets to fulfill a life-long dream will hopefully inspire other seniors to think about what’s on their bucket list.”

To live out her dream, Anita is headed to the Wingfoot Two. Based in Carson, California, this blimp has traveled the West Coast extensively since arriving in 2017. It’s been to the NBA Finals, the Oscars, the College Football Playoffs, PGA Tour events, and the Rose Parade.

It’s also become the first Goodyear Blimp in over 50 years to act as a jump platform for skydivers, when the USAF Academy Wings of Blue skydive team made their historic leap.

Today, Anita makes her own historic leap, as the first in Webb’s nonprofit to catch a ride on the famous Goodyear Blimp.

The iconic household name, Goodyear, was first founded as a tire and rubber company back in 1898. With America feeling the effects of the Industrial Revolution, Goodyear started looking for a unique way to go beyond tires and find their own place in the movement.

So, they took to balloons and aircraft and the beloved Goodyear Blimp was born.

By the roaring 1920s, Goodyear Blimps could be seen across the skies of the country, from Hollywood to New York, and were rapidly growing as an American icon. Flash forward through the decades to today, and the digital age and social media have given the blimp an even larger fanbase.

“I always wanted to go up and I tried on my own many times,” Anita says, “but it just wasn’t possible. So when this happened,” she pauses, “I’m just so happy.”

Like Weiman alludes to, this poignant moment in Anita’s life is nothing short of a miracle. On June 22nd, 1999, Anita woke up to go to work, fell, and was transported to the hospital by ambulance for a brain operation.

“They said I would not make it,” Anita recalls, “[they] told my daughter not even to bother to come. But yet, I walked out of there — and I’ve been good since.”

At over 246 feet long, the blimp Anita will ride on today stretches nearly the length of a football field and the bigness of it is startling when seen up close. Its top speed is 73 miles per hour and with three vectoring engines, it has incredible maneuverability.

“It’s a joy to fly,” Captain Matthew St. John says,“ [it] flies like an airplane and lands like a helicopter.”

With its aluminum and carbon fiber semi-rigid frame, the blimp supports an envelope with the capacity to hold almost 300,000 cubic feet of helium.

“It’s hard to believe I’m up here,” Anita says once on board, “It’s just really smooth, and it’s really quiet compared to what I thought it would be. And very spacious.”

As she gazes out the window towards the teal ocean below, the blimp floats over the harbor and the Long Beach Pier, landmarks that Anita has recognized her whole life.

Only now — she’s seeing them from an entirely new height.

“When you’re given a new lease on life,” Weiman smiles, “you tend to dream bigger. For Anita Saavedra, nothing is as big as being here on the Goodyear Blimp.”

Anita may have taken that fall 19 years ago but she, like many of Weiman’s other enthusiastic bucket list achievers, has in no way allowed that to keep her on the ground. In fact, it’s done just the opposite, allowing her to rise and float among the clouds in the Goodyear Blimp.

As she exits the blimp after her 45-minute flight, clasping the hand of her daughter Christina, there’s a change in Anita’s energy — a difference in perspective since being up high on the Wingfoot Two.

“This has been a lifelong dream that she included me in,” Christina says, “it’s made her think about other things that she wants to complete in her life on her bucket list.”

Because of both My Jump and Goodyear, Anita’s dream of going up in Goodyear Blimp was made a reality on July 9th, 2018.

“Wingfoot Two is an incredibly beautiful and massive moving machine,” Weiman says, “Even though it was not my bucket list wish, it’s truly one of the most amazing adventures I have ever been on.”

The Goodyear Blimp supports charitable organizations and causes like Muscular Dystrophy, Toys for Tots, food banks, American Cancer Society, The American Red Cross, The Salvation Army, Support Our Troops, and more. It also gives back to the community by providing flight time to organizations researching the environmental health of their local areas, like whale migration, river ecology, and wildlife maintenance.

“Thank you so much Goodyear — I’ve followed you my whole life,” Anita says as she looks towards the sky, the blimp now cascading back through the clouds, “I’m so grateful after all this time I was able to finally get up in that blimp. I will always be grateful. “

To find out when one of America’s most beloved icons will take flight near you, check out the Goodyear Blimp schedule via this link.

To make a bucket list request or a donation, visit MyJump.org or email Webb Weiman at webb@myjump.org.