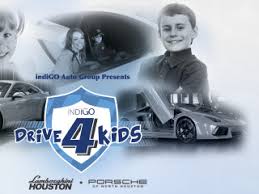 The indiGO Auto Group’s 4th Annual Drive 4 Kids was held at the BMW Performance Center West at the Thermal Club on December 7, 2019. Over 35 drivers participated in the event that raised over $22,000 to help the children served by the Barbara Sinatra Children’s Center.
John Thoresen of the Sinatra Center said: “We were so very pleased that Todd Blue and Kelly Wolf from indiGO again selected our organization to benefit from this great experience. Everybody that participated once again had the thrill of a life time.”

Money raised at this year’s Drive 4 Kids is being used to help construct and supply a new art studio at the Barbara Sinatra Children’s Center. Art therapy is a leading tool to help children that have suffered the devastation of abuse.
This marks the 4th year that indiGO has sponsored the event at the private Thermal Club and the BMW Performance Center. The day starts with about 45 minutes of instruction and then it is off to the various driving elements. The drivers break into groups and take part in a one on one drag race, competition on a slip track, a time trial, and then they get behind the wheel of a high performance BMW M4 for a spin around the big track at well over 100 mph. A great lunch is served and many drivers brought friends and relatives to watch the action.

Drive4Kids was founded in 2012 when Founder and CEO of indiGO Auto
Group, Todd Blue sought to make an impact in his community by hosting an
event that combines excitement for performance vehicles and compassion
for helping children in need. In the first three years, from 2012 to 2014, the Drive4Kids event was held at indiGO Auto Group headquarters in Houston, Texas and raised money
for the Texas Children’s Hospital. As indiGO Auto Group expanded with
dealerships across the county, so did the Drive4Kids event.

In 2016, indiGO Auto Group hosted the first Drive4Kids in California at
the BMW Performance Center at Thermal, raising money for the Bianca
Rae Foundation’s Rae of Hope retreat. In 2017 and 2018, Drive4Kids was
held at the same location in California and benefited the Barbara Sinatra
Children’s Center both years.

Since the inception, Drive4Kids has raised a total of $240,000 for these
charities, and will continue to support organizations in the communities
indiGO Auto Group dealerships serve.

About the Barbara Sinatra Children’s Center:
Founded in 1986 by Barbara and Frank Sinatra, the Barbara Sinatra Children’s Center is dedicated to ensuring every child’s right to a normal, healthy and secure childhood. Since its creation, about 23,000 children have received outpatient mental health and counseling services at the center. The Center provides individual, group and family therapy along with special programs that address issues associated with children suffering the effects of child abuse and neglect. An estimated 700 children are counseled annually on an outpatient basis, and no child is ever turned away because of a family’s inability to pay. For more information, visit: BarbaraSinatraChildrensCenter.org.

Tweets by DesertCharities
Salvation Army Receives Grant for Afterschool Program
The Shops On El Paseo Raise over $83,000 At A Miracle On El Paseo for Bighorn BAM