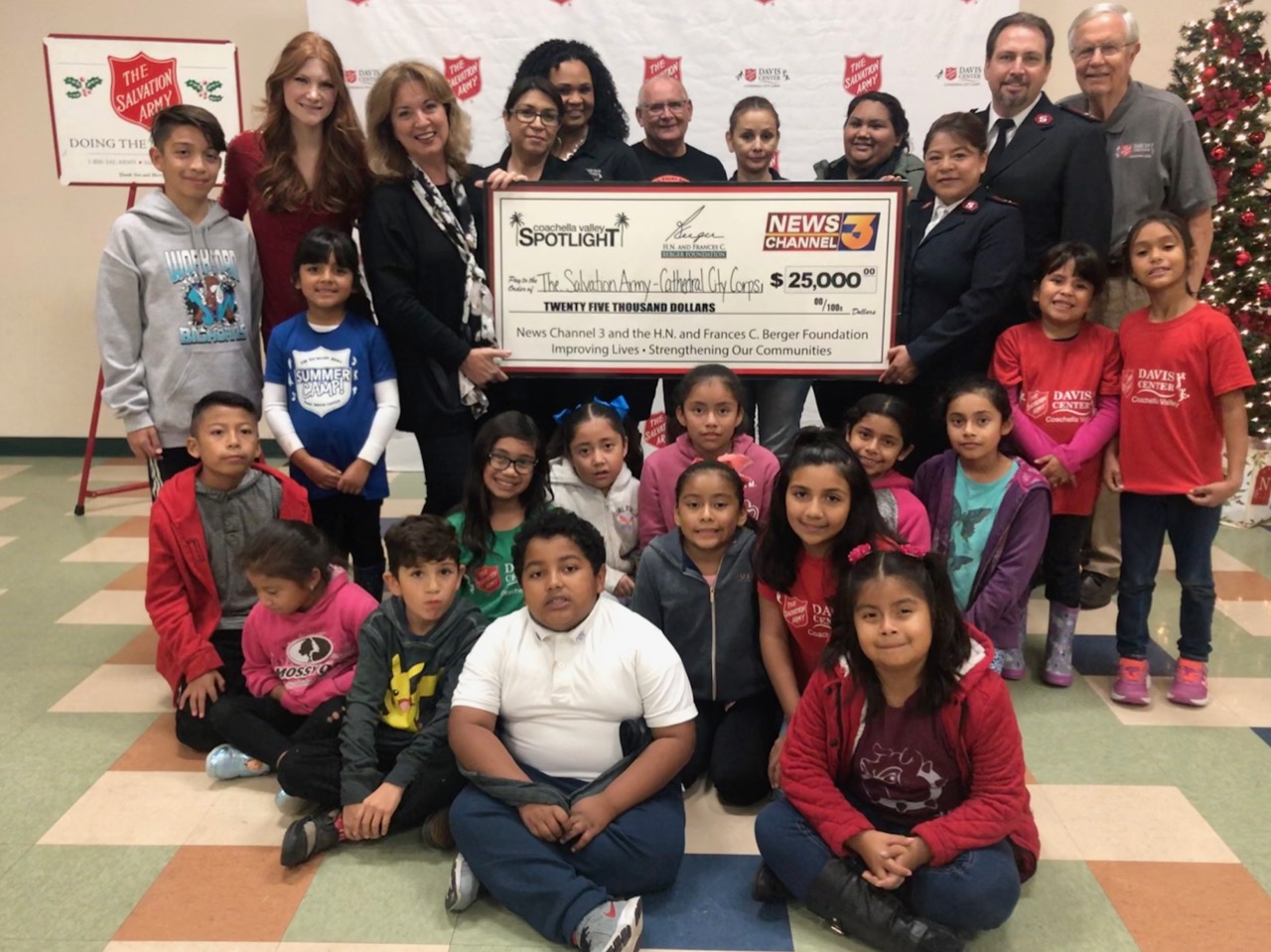 Grant for $25,000 from the H.N. and Frances C. Berger Foundation will benefit at-risk children

This time of year, bell ringers stand next to red kettles collecting for The Salvation Army. However, because the oversized check was too big to fit in the kettle, Catharine Reed, Vice President of Charitable Programs for the H.N. and Frances C. Berger Foundation, delivered it in-person to The Salvation Army’s Cathedral City Corps. The $25,000 Coachella Valley Spotlight grant will expand the organization’s afterschool programs.

“We are so grateful to the Berger Foundation and News Channel 3,” said Captain James Parks, with The Salvation Army – Cathedral City Corps. “These funds will directly benefit children in our area that need help with tutoring and provide them more afterschool enrichment, such as sports and music.”

Up to 50 children participate in the afterschool program each day. These children are primarily identified as at-risk and low-income and many might not otherwise have a place to go after school, let alone an opportunity to participate in music classes, sports teams, nutrition classes, scouting, crafts and more. Kids receive snacks and meals while in the program.

“The Salvation Army is a large, international organization, but it’s nice to see first-hand how it is helping people in our community,” said Catharine Reed, Vice President of Charitable Programs for the H.N. and Frances C. Berger Foundation.

Established in 1865, The Salvation Army offers educational, spiritual and recreational programs to people of all ages. The Salvation Army has 1200 corps and 7550 centers in the United States as well as locations in 131 countries throughout the world. The only site in the Coachella Valley is in Cathedral City, and the grant funds will support local-area needs.

“Extra support with homework, mentoring and activities can often be the difference in a child’s life to feel supported and empowered,” said Jerry Upham, General Manager of Gulf California Broadcast Company, which owns and operates KESQ News Channel 3 and KPSP CBS Local 2. “The local Salvation Army Corps is doing that.”

The Salvation Army relies heavily on the generosity of volunteers, many of whom stand outside stores throughout the holiday season, collecting spare change in the iconic red kettles. Volunteers have been ringing bells, like this, to attract donations since the campaign started in 1891. Throughout the rest of the year, about 100 volunteers assist the Cathedral City Corps gathering donations, preparing meals, and making and distributing weekly food boxes.

Through the Coachella Valley Spotlight partnership with the H.N. and Frances C. Berger Foundation and News Channel 3, The Salvation Army – Cathedral City Corps was featured on News Channel 3 programming including “Eye on the Desert” (which airs on CBS Local 2 weeknights at 6:30 p.m.), in public service announcements and on kesq.com. The local Salvation Army is located at 30-400 Landau Boulevard, Cathedral City. For more information go to https://coachellavalley.salvationarmy.org or call (760) 324-2275.