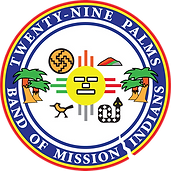 The Twenty-Nine Palms Band of Mission Indians(the Tribe) has committed more than $9 million to support California Indian Nations College(CINC), which aims to become the first stand-alone, fully accredited tribal college in California in decades. The announcement was made by the Tribe’s Chairman, Darrell Mike, who has a long track record of working to strengthen the Coachella Valley region in all facets of health, welfare, and education.

One of the Tribe’s primary missions is to build a solid foundation for new generations and this donation is aligned with that vision. This donation representations the largest funding pledge to CINC since its establishment nearly five years ago. As a 501(c)(3) non-profit, the Tribe has already donated $3.75 million and has now additionally committed $1.9 million annually over the next three years, bringing its total donation to $9.45 million.

Chartered by the Twenty-Nine Palms Band of Mission Indians in September 2017, the College received its initial seed money from the Tribe early the next year, enabling it to quickly build staff and capacity. In Fall 2018, the College taught its first classes in cooperation with UC Riverside Extension. The following Spring, CINC formed an instructional partnership with College of the Desert in Palm Desert, ensuring that all CINC classes are fully transferable.

“We believe that education is the foundation for success in life. CINC offers a springboard for Native and non-Native students pursuing opportunities that can be best achieved with a college degree and the knowledge that comes with it,” stated Chairman Darrell Mike, who hopes that other regional tribes with students enrolled in tribal colleges will step up to match this pledge.

About The Twenty-Nine Palms Band of Mission Indians

CINC was established with a vision to provide two-year accredited Associate of Arts degrees, preparing graduates for careers as well as further educational opportunities at colleges and universities nationwide. Through well-rounded coursework that incorporates indigenous culture, Native language revitalization, and the re-institutionalization of traditional Native American values, CINC seeks to educate students in such areas as business and hospitality administration, American Indian studies, film, communications, philosophy, and sociology, among more than 20 learning tracts. For more information, please visit cincollege.org.